How it all started

Well, let's take a journey back in time - if you’ve met me, you’ll no doubt get that I’m a bit of a geek!

I went to college to study GNVQ Information Technology at an intermediate level - I then moved onto the advanced version of the course the year after, but a few months into it, I realised that this wasn't for me - it was far too theory based and I was more into the practical side of technology.

As well as my love of computers, I'd discovered the internet in my first IT course, but I wasn’t just browsing websites - I wanted to know how they were built, so I spent a lot of time looking at websites’ source code and copying everything I found that was ‘cool’.

Yes, I had a Geocities website - remember those? Unfortunately, I don’t have any screenshots of those early sites - phew!

I decided to find out what courses taught web design, but back then there wasn’t a specific course for web design - so I did the next best thing - a Higher National Diploma in Multimedia - a course that covered web design, game design, video and music production, photography and programming.

This course allowed me to get really creative and I knew I had found what I wanted to do for a living!

Part of the course was to work with a local business owner to design and develop a website for their business.

This is what we did as a group: 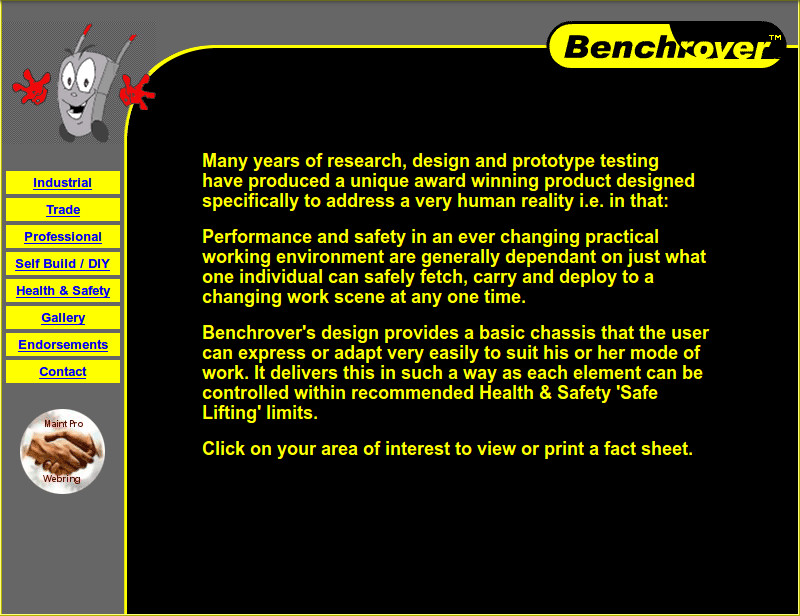 I ended up working privately with that client and he has been my client ever since.

After the 2 years doing the HND Multimedia course, we were given the option of staying on for a 3rd year to get a BA degree in multimedia - I stayed. I got a 2.2 for my BA - turns out I wasn’t that great at researching and writing a 15000-word dissertation - it brought my mark down from a 1st for my practical work, to a 2.2 - oh well!

I can’t remember the exact title of my dissertation, but it was about looking into the impact that digital equipment was having on the music over analogue equipment, for example, vinyl vs CD etc.

I remember being told that we should send out questionnaires - but for me sending out paper questionnaires seemed like an archaic thing to do, so I built a website with my questions, that saved the answers to a database - all very basic, but it worked - shows you how interested I was in writing a dissertation. :D

After I finished college and got my Bachelors degree, I tried to get a job as a website designer, but back then there wasn’t that many companies doing web design and the ones that were, were too small to hire me because I didn’t have any commercial experience, and I couldn’t get any commercial experience because I couldn’t get a job - the ol' catch 22!

So I got a job working at Tesco! I started stacking shelves like everyone does and I had done before while at college - but after a month I moved up to stock control, but I really did not like working in a store. I ended up getting an IT job working for the NHS, working as an IT Support Analyst. Soon after I ended up working with an IT manager on a new project, to refit all local doctors surgeries with brand new computers and servers, it was just me and him - it was great.

I loved this project so much, this project was my first foray into self-employment - I know I wasn't self-employed, but because it was just me and this manager, we got to schedule our own time and workload. I ended up being the first port of call for all GP IT issues. But even though I was loving my IT job, I was still doing web design work in the evenings after finishing my job - also known as 'moonlighting'.

I teamed up with a colleague from my multimedia course, who was also not having any luck getting a job as a web designer. We created a partnership and traded as Multi Creative Media.

This was our first website - my business partner was the creative genius! 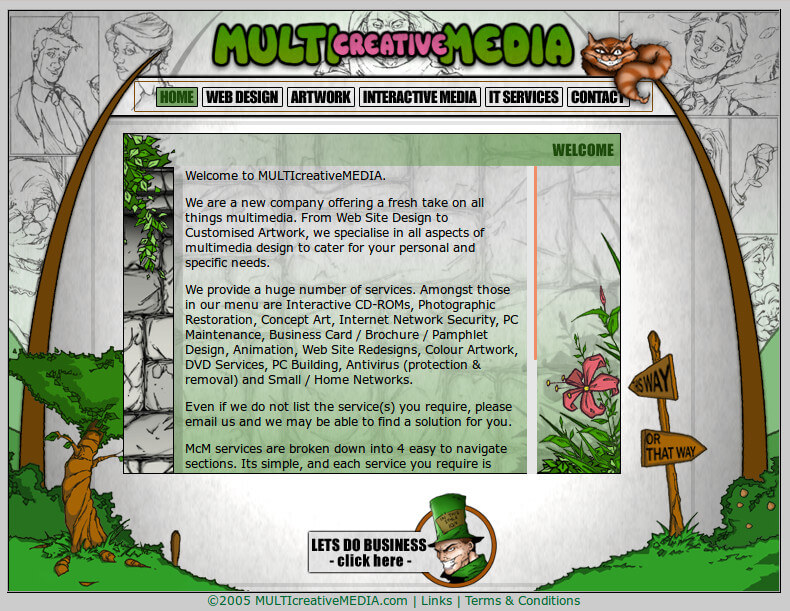 We carried on working together for a few years, I then landed my first ever website designer job working at Tesco Compare - one of the first insurance comparison websites - yeah I know, Tesco again :D

I was actually employed by RBS - Tesco Compare was a joint venture between RBS and Tesco, but after 2 years working there, Tesco bought the RBS half of the business and a year later they moved the business to Scotland. I was offered my job up there, but at that time, I was recently married and we had our first child - we didn’t want to move to Scotland.

It was time to move on

I got to work on some great projects, some that were just for testing out new ideas to see if they would work and others actually got implemented. The last thing I worked on was the Snow Reports section on the Crystal Ski website and it still in use - yay!

I found that job and company quite restrictive in the end, I loved the people I was working with, but the politics & rules of big companies really got to me.

I moved onto to a new job - working as a front-end developer for a company called Motortrak - they are an agency that specialises in building CMS sites for the used car market. I got to work with some great people and some great brands, including McLaren, Mercedes-Benz, Land Rover and Tom Hartley.

I lasted about 2 years at this job this time. It was going great, I started building an internal framework that was going to be used to build all websites and it was responsive, but my very supportive Head of Technology left and things took a turn - the company really changed into something that I didn’t like, so it was time to leave.

At that time, I was working from home 3 days a week, I was in the office Monday and Tuesday. I had moved to Suffolk from Surrey - I was driving down for the 2 days and then coming home.

I decided to leave. I also decided that I was going to work for myself. No more big company rules and politics to deal with.

I built this website, it has changed a little bit since then, for the purposes of finding work. After about 6 months I found my first contract job.

I got a 3-month contract working in Norwich with Virgin Wines - they were re-building their entire front end website and back-end. This was a great first contract, but I felt like I wasn’t good enough for it, so I was always staying late - until about 8 pm, which meant I'd get home at about 10 pm and I did that for a few months. It was hard work, but I learnt a lot.

The setup was quite different, there were 3 contractors and 3 perm staff, we got given a room and for the duration of the project, each developer was paired with a designer and we worked closely on the section we were designing and building.

This was a great way of working. We were also using Pattern Lab and building out a style guide - this was amazing, I had read so much about it, to actually work this way and seeing how it was being used by other people in the company was great.

I’ve had a few more contracts since then but now I am trying to focus more on freelance work.

This is the kind of work that I thrive on. I love solving problems, I do like working with other people and I do, if I need a new logo for a client website or if a client needs something that is beyond my skill set. But the majority of the time, it is just me.

When I started contracting, I took my old name, Multi Creative Media and registered it as a Limited company and I still use that company name, but this year I decided that I was just going to trade as myself - Juan Fernandes Freelance Website Designer.

This felt like the right thing to do, working as Multi Creative Media, I always felt that I gave the impression that I was bigger than I actually was - website copy referred to ‘We’ rather than ‘I’ etc.

All in all, I have about 12 years of experience as a website designer, having gained that experience working in many roles and a few different industries.

After my second contract, working as an Interaction Designer with a great team up in Sheffield, I was offered a full-time position, but based in their London office - I didn’t think twice about accepting it, but I should have. Because I had worked with such a great bunch of people, I forgot about my dislike for big companies, I also thought that working from London, would have been the same as it was when I worked in Sheffield. Things weren’t the same, and a lot of change happened within the company - 90% of the Sheffield office were made redundant and then 6 months later, I too, was made redundant.

So I decided to go back to contract work and also work on establishing myself as a freelance website designer.

When I say I dislike working for big companies, I’m not saying there is anything wrong with them - I believe that I am not suitable to work for large companies.

What I didn’t realise all those years was that perhaps I was not suited to permanent work for companies and that I should have started working for myself all those years ago. But I have gained a lot of experience.

I hope that by reading this quite long post you have gotten to know me a bit better and have learnt about my journey to becoming a company of ‘Juan’ and establishing myself as a freelance website designer.

Posted on 8th June 2017, by Juan Fernandes in personal